For more than 90 years, DPR's California Pesticide Residue Monitoring Program (CPRMP) has been collecting and analyzing fresh fruits and vegetables for pesticide residues. The CPRMP is the oldest and most extensive pesticide residue monitoring program in the nation. The focus of the CPRMP is enforcing pesticide residue tolerances set by the U.S. Environmental Protection Agency (U.S. EPA) and to prevent "public exposure to illegal residues" by removing produce containing illegal pesticide residues out of the channels of trade (Cal. Food & Agric. Code §12532). The Code of Federal Regulations, Chapter 40, Part 180, defines and dictates the analysis of raw agricultural commodities for pesticide residue testing. U.S. EPA tolerances are established for raw agricultural commodities based on the toxicity of the pesticide, how much and how often the pesticide is applied, and how much of the pesticide remains in or on the commodity. Data collected also provides DPR's Human Health Assessment Branch information to assess the dietary risk of certain pesticides. 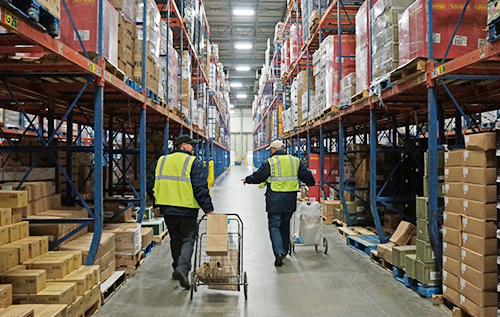 Figure 1. DPR scientists collect samples from all channels of trade including distribution centers, above, as well as farmer's markets, retail stores and roadside stands.


DPR residue monitoring staff sample a wide range of fruits and vegetables collected at sites wherever produce is sold, packed, or distributed. Samples are collected from businesses in the channels of trade, including wholesale and retail outlets, distribution centers, and farmers' markets. Emphasis is placed on sampling fruits and vegetables that: 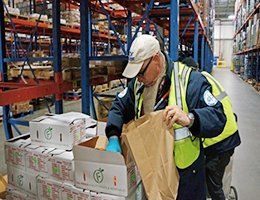 Figure 2. DPR scientists collect samples and document produce information on Produce Sample Analysis Reports that remain with each sample as part of the chain of custody.

In 2017, DPR collected 3,695 produce samples, representing 135 different fruits and vegetables intended for human consumption. A produce sample constitutes approximately two pounds of a single type of produce (such as nectarines) collected at a sampling site. Commodities sampled originated from 28 countries (Figure 3). About 60% of the samples were domestically (U.S.) grown produce (2,208 samples), 39% of the samples were imported produce (1,428 samples), and the remaining 1%, (59 samples) were of undetermined origin. 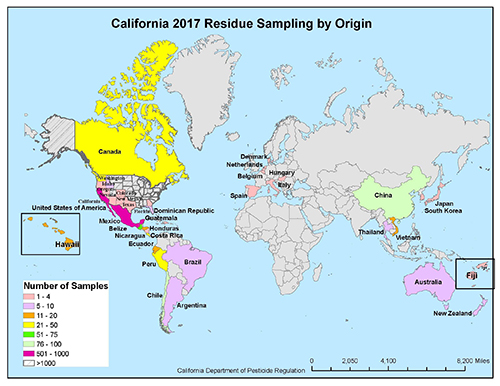 Figure 3. Origin of produce sampled by the California Pesticide Residue Monitoring Program in 2017

The 3,695 collected samples were analyzed at the California Department of Food and Agriculture (CDFA) Analytical Laboratories, located in Sacramento and Anaheim, using GC and LC tandem mass spectrometry to detect more than 400 different pesticides and pesticide breakdown products. The majority of samples (96%) had no detectable pesticide residues or residue levels at or below U.S. EPA tolerance levels (Figure 4). In 2017, the CPRMP found 149 illegal samples with 234 illegal pesticide residues detected. 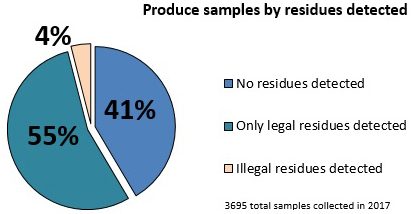 Figure 4. Percentages of produce samples collected in 2017 with legal, illegal, or no detected pesticide residues 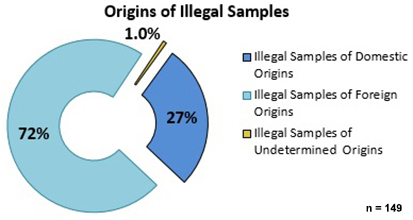 
Data collected from the CPRMP for 2017 shows that only 2% of US grown produce samples had illegal pesticide residues. (Table 1).


Table 2. California grown produce with illegal pesticides by county of origin in 2017.

Table 3. California grown commodities with illegal residues by pesticide in 2017.

Produce labeled as "organic" does not mean, "not treated with pesticides." The U.S. Department of Agriculture allows certain pesticides for use in organic farming. In addition, certified organic produce may have residues of other pesticides at less than 5% of the U.S. EPA commodity tolerance (Code of Federal Regulations, Title 7, Part 205.671).

In 2017, the CPRMP collected 288 organic samples and 99% of those samples had legal or no residues detected. These samples represented 69 different commodities from 12 different countries. Seventy-five percent of the organics tested (215 of 288) were of domestic origins; 23% of the samples (67 of 288) were imported organic.

Although the CPRMP detected 42 organic samples with quantifiable residues, only three of those samples had illegal residues. Two of the illegal samples, lemon and lime, were imported from Mexico. The other sample was of kale grown in California. All three illegal residues were for pesticides that had no tolerance established for the commodity. Results for all organic samples were reported to the CDFA Organic Program for enforcement of state and federal organics standards.


Table 5. All commodities with illegal pesticide residues sampled in 2017.

When illegal residue(s) are detected, DPR's Human Health Assessment Branch (HHA) reviews the toxicity for each pesticide residue. A dietary risk assessment may be conducted by HHA to determine whether the residues on the sample pose a potential acute health risk to consumers. Assessments are based on consumption rates for the produce and acute reference doses for that pesticide or combination of pesticides. If HHA determines the produce may pose a potential health risk to consumers, DPR makes a concerted effort to determine the origin of the produce and to remove it from the channels of trade. In 2017, HHA determined 12 samples were potential health risks to consumers (Table 7).


Table 7. Commodities and their origins found to contain residues that can pose a potential health risk to consumers.


DPR notifies and collaborates with the California Department of Public Health and the U.S. Food and Drug Administration to alert consumers and work with growers and importers to ensure future illegal residues do not make it into our food supply.

When illegal pesticide residues are detected, DPR quarantines the produce containing the illegal residues. The owner of the quarantined produce has the option to either securely dispose of it on site, "recondition" the produce, or convert it into byproducts. Reconditioning must reduce an over-tolerance of an otherwise legal residue or eliminate an illegal residue when there is no tolerance established. After reconditioning, the owner must pay for the sample to be reanalyzed. If test results show the pesticide residue below the legal tolerance, DPR may allow sale of the produce. If not, disposal of the produce is required.

DPR investigators will trace the movement of the produce with illegal residues by contacting distributors, retailers, and wholesalers throughout California. DPR quarantines and collects additional samples if suspected of carrying illegal residues. If it is determined that the produce with illegal pesticide residues was grown in California, the County Agricultural Commissioner (CAC) in the county where the produce was grown will investigate to determine the source of contamination. Frequently, DPR scientists assist CAC staff with this investigation. Both DPR and CACs have authority to levy civil penalties for illegal use of pesticides.

In 2017, DPR imposed $208,000 in civil penalties against five produce companies with a history of recurring illegal pesticide residue violations. Information on these penalties can be found at Produce with Illegal Pesticide Residue Fines and Settlements.