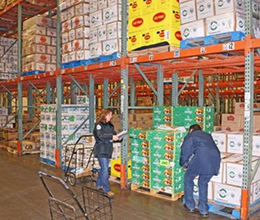 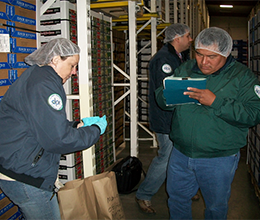 Figure 1. DPR scientists collect samples from all channels of trade including distribution centers, above, as well as farmers markets, retail stores and roadside stands.

In 2016, DPR collected 3,585 produce samples, representing 161 different fruits and vegetables intended for human consumption. A produce sample constitutes approximately two pounds of a single type of produce (such as head lettuce) collected at a sampling site. Samples were collected from businesses in the channels of trade, including wholesale and retail outlets, distribution centers, and farmers' markets. Commodities sampled originated from 27 countries (Figure 2). About 62% of the samples were domestically (U.S.) grown produce (2,228 samples); 37% of the samples were of imported produce (1,320 samples); and the remaining 1%, (37 samples) were of undetermined origin. California grown produce accounted for about 24% of (869 samples) of all samples tested.

Figure 2. Origin of produce sampled by the California Pesticide Residue Monitoring Program in 2016 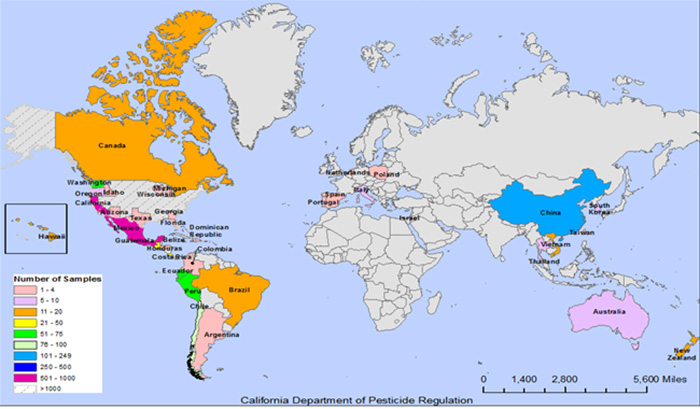 The 3,585 collected samples were analyzed at California Department of Food and Agriculture (CDFA) Analytical Laboratories, located in Sacramento and Anaheim, using GC and LC tandem mass spectrometry to detect nearly 400 different pesticides and pesticide breakdown products. The majority of samples (96%) had either no detected pesticide residues or had residue levels at or below U.S. EPA tolerance levels (Figure 4).

Figure 4. Percentages of produce samples collected in 2016 with legal, illegal, or no detected pesticide residues

Of the 3,585 samples tested in 2016, a total of 238 illegal residues were found on 149 samples. Fourteen different commodities accounted for the majority of these illegal residue samples (Table 1). Table 2 summarizes the residue testing results for the most frequently sampled commodities in 2016.

Table 1. The 14 commodities accounting for over half of the illegal pesticide residue samples collected in 2016. Sample results are separated by country of origin.


Table 2. The 25 commodities most frequently sampled (accounting for over half of the samples) in 2016. Sample results are separated by country of origin.

Produce labeled as "organic" does not mean "not treated with pesticides." The U.S. Department of Agriculture allows certain pesticides for use in organic farming. In addition, certified organic produce may have residues of other pesticides that are less than 5% of the U.S. EPA tolerance for that commodity (Code of Federal Regulations, Title 7, Part 205.671).

In 2016, 148 (4.1%) of the samples collected were labeled as organically grown. These samples represented 53 different types of commodities. 78% of these samples (116 of 148) were grown in the U.S. with the majority grown in California. The CDFA laboratory reported results for these samples to DPR and the CDFA Organic Program which is responsible for enforcement of state and federal organics standards. 1.4% (2 of 148) of organic samples tested had either an over tolerance or no tolerance established violation (Figure 5). 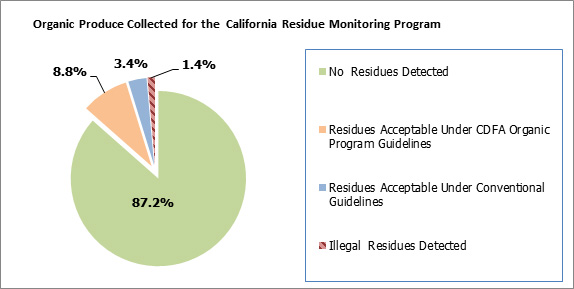 Multiple state agencies are assessing the public's exposure to the herbicide glyphosate. In conjunction with the CDFA's Center for Analytical Chemistry, DPR piloted a project screening fresh produce for glyphosate residues. Screening of glyphosate required the CDFA lab to develop a specialized process for analyzing glyphosate residues in addition to their standard screen for nearly 400 pesticides and pesticide breakdown products. Between July 2016 and June 2017, DPR collected 308 samples, representing 52 different commodities, specifically for glyphosate screening. (Table 4).

When illegal pesticide residues are found, DPR immediately investigates and quarantines the produce containing the illegal residues (Figure 5). The owner of the quarantined commodity may securely dispose of it on site, or be allowed to either "recondition" the produce or convert it into byproducts. Reconditioning is intended to reduce an over-tolerance of an otherwise legal residue or eliminate an illegal residue when there is no tolerance established and may include washing of the produce. After reconditioning, the owner must pay for the sample to be reanalyzed. If test results show the pesticide residue below the legal tolerance, the owner may be allowed to sell the produce. If not, disposal of the produce is required. 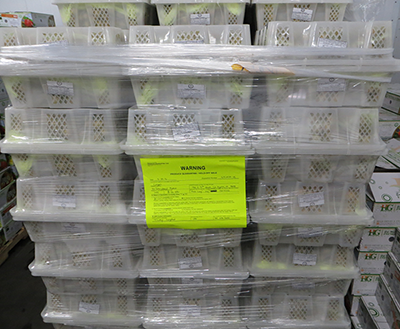 Figure 5. This lot of 144 pallets of longan was quarantined by DPR scientists on suspicion of carrying illegal pesticide residues and later destroyed after the CDFA laboratory confirmed illegal residues were present.

DPR investigators trace the movement of produce with illegal residues by contacting distributors, retailers, and wholesalers throughout California; obtaining copies of invoices, customs forms, and other paperwork; imposing quarantines; and collecting additional samples as needed.

If it is determined that the produce containing an illegal pesticide residue was grown in California, the County Agricultural Commissioner (CAC) in the county where the produce was grown will investigate to determine the source of contamination. Frequently, DPR scientists assist CAC staff with this investigation. Both DPR and CACs have authority to levy civil penalties for illegal use of pesticides

In 2016, DPR imposed $45,000 in civil penalties against four California produce companies with a history of recurring illegal pesticide residue violations. Information on these penalties can be found at the following link "Produce with Illegal Pesticide Residue Fines and Settlements."