CPRMP staff sample a wide range of fruits and vegetables collected at sites where produce is sold, packed, or distributed. Produce sampling is not designed to be statistically representative of the overall rate of residue levels for a particular pesticide, commodity, or place of origin. Instead, sampled commodities selected are based on multiple factors including:

Therefore, sampling results may be biased towards finding produce more likely to have pesticide residues than if samples were collected in a random statistical fashion. The number of samples of a given commodity may not be large enough to make generalizations about the pesticide residue levels for the entire volume of a commodity in trade.

If illegal residues are found DPR immediately removes the illegal produce from the channels of trade. In addition, if the owner of the commodity has similar produce from the same source, DPR quarantines those lots unless subsequent laboratory testing determines they are free from illegal residues. Further, DPR traces the distribution of the illegal produce by contacting distributors throughout California, imposing quarantines and conducting extra sampling and testing. In 2019, 96% of produce samples collected by DPR were legal and either had no detectable pesticide residues or residue levels below the applicable U.S. EPA tolerance. Of the 3,274 produce samples DPR collected in 2019, illegal pesticide residues were found in 4% of samples (137 samples). 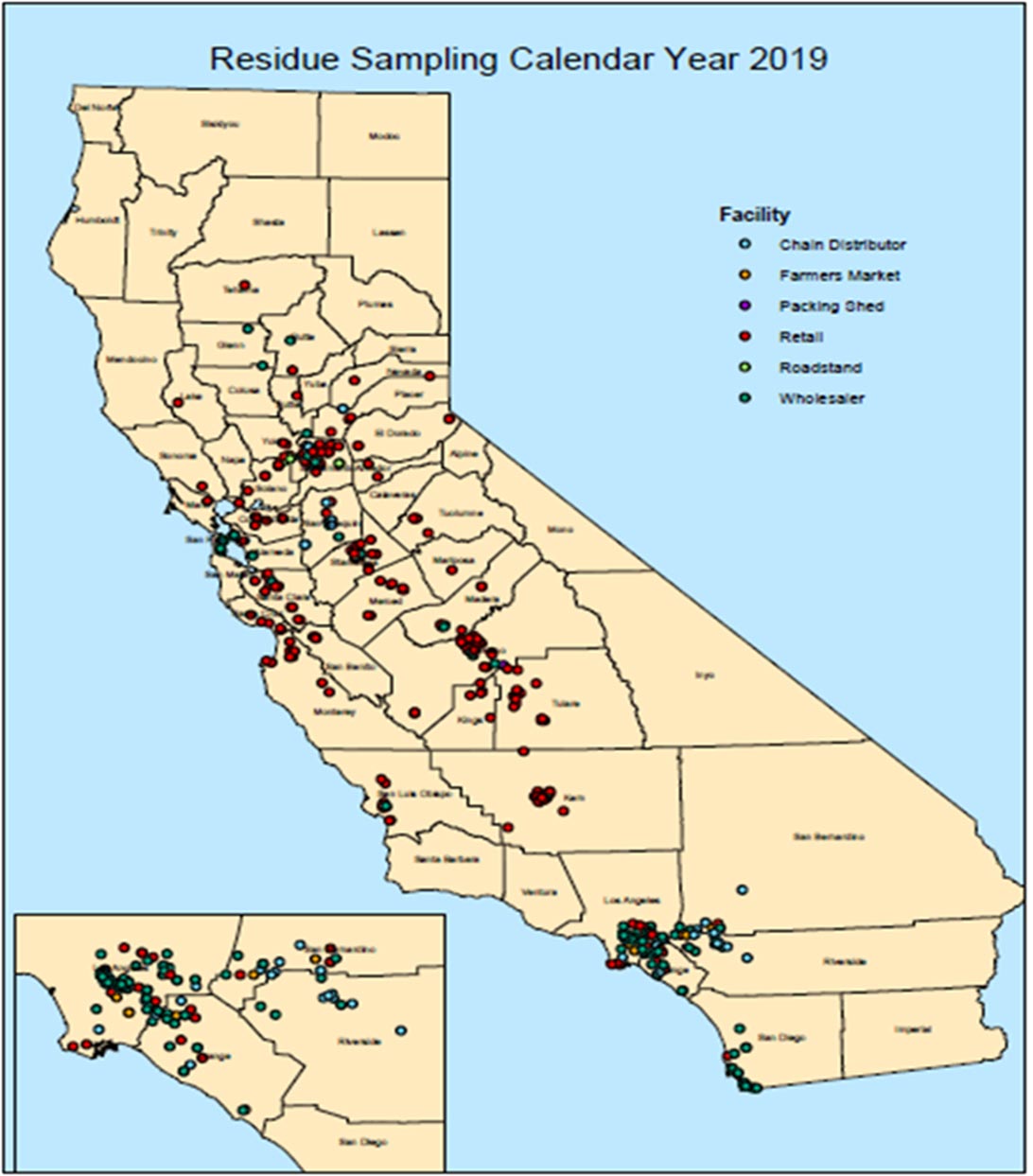 In 2019, DPR collected 3,274 produce samples, from 28 different countries representing 124 different types of fruits and vegetables. The majority of samples, 3,137 (96%), were legal and either had no detectable pesticide residues or residue levels below the applicable U.S. EPA tolerance (Figure 2). Illegal pesticide residues were found in 137 samples (4%, see Appendix 1a identifying all produce samples found to contain illegal pesticide residue with corresponding sampling information, including the county in which the illegal residue was discovered). The majority of illegal samples (83%) involved detection of pesticide residues with no established federal tolerance, meaning any detected level is considered illegal. 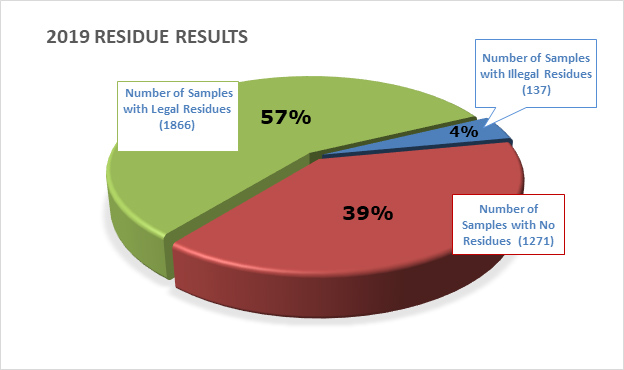 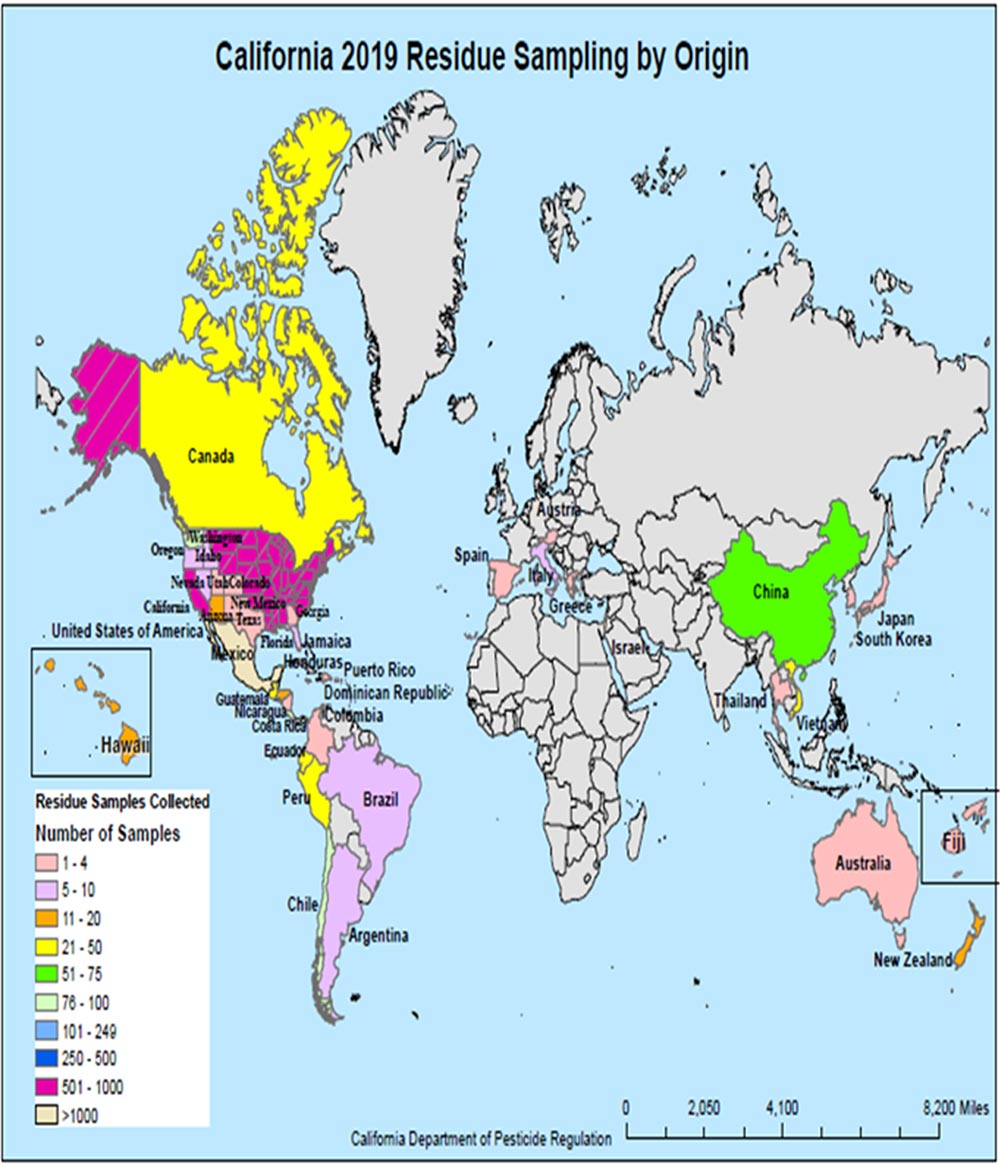 Figure 3. Map of origins of sampled produce in 2019


Table 1. Numbers of illegal produce samples collected in 2019 by country of origin 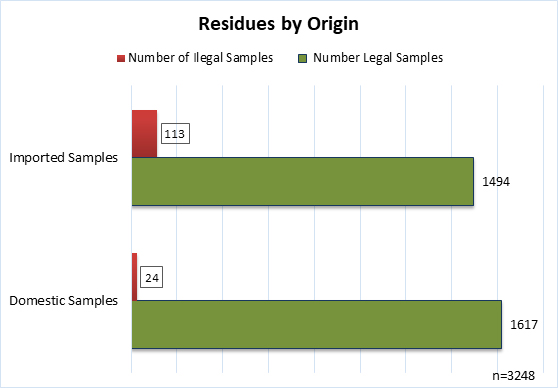 In 2019, the program sampled 124 different types of fresh fruits and vegetables (see Appendix 1b for the list of all sampled commodities). Illegal residues were found in 48 different commodities (Figure 5). 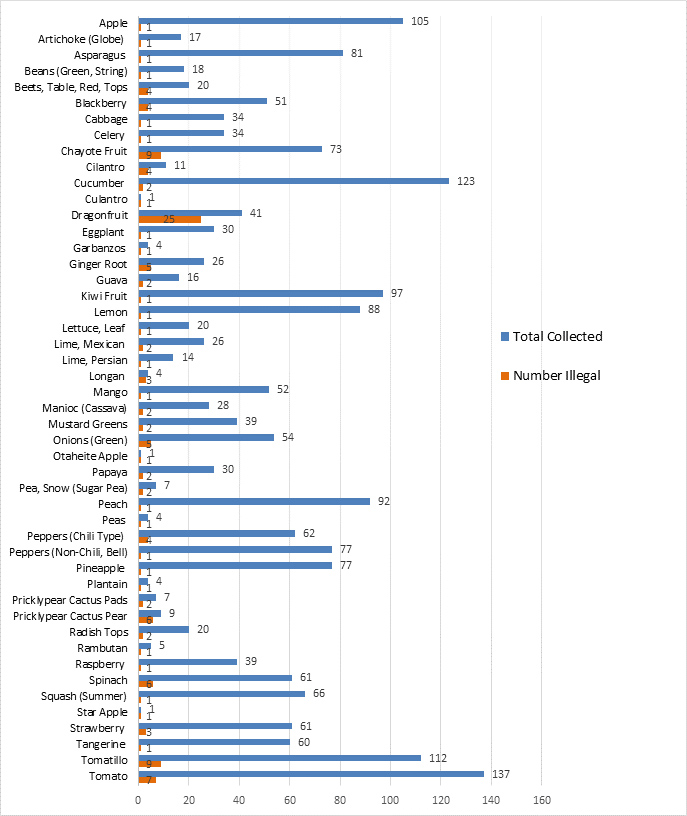 Figure 5. Commodities with illegal residue in 2019

DPR’s Human Health Assessment Branch (HHA) reviews the toxicity for each illegal pesticide residue. A dietary risk assessment is conducted to determine whether the residues pose a potential acute health risk to consumers. Assessments are based on consumption rates for the produce and acute reference doses for that pesticide or combination of pesticides. If HHA determines the produce may pose a potential health risk to consumers, DPR makes a concerted effort to remove it entirely from the channels of trade. DPR notifies and collaborates with the California Department of Public Health and the U.S. Food and Drug Administration on these cases. 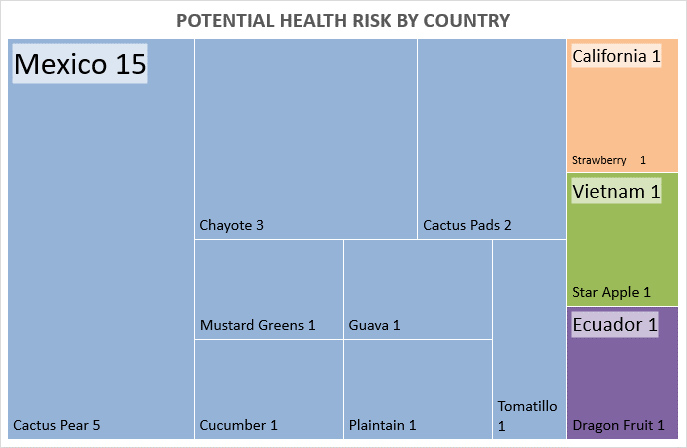 California grown produce accounted for more than 48% (787 samples) of all domestic samples tested. This value likely under represents the true number of California grown produce collected, as sampled commodities labeled as "product of USA" are potentially grown in California. For illegal residue samples, DPR does a trace back investigation to determine the source of the produce. However, for legal residue samples, DPR does not do a trace back investigation and is unable to determine, based on labeling alone, the state of origin for produce labeled "product of USA".

Produce labeled as "organic" does not mean "not treated with pesticides." The U.S. Department of Agriculture allows certain pesticides for use in organic farming. In addition, certified organic produce may have residues of other pesticides at less than 5% of the U.S. EPA tolerance for conventionally grown commodities (Code of Federal Regulations, Title 7, Part 205.671).

The CPRMP collects organic produce as encountered during routine sampling and shares these testing results with CDFA. CDFA is responsible for administering the State Organic Program and regulates organic operations in the state. All organic samples with detected pesticides are referred to CDFA for follow up investigation and potential enforcement under the State Organic Program. In cases where an organic sample has pesticide residue levels above the U.S. EPA tolerance for conventionally grown commodities, in addition to referral to CDFA, DPR will also pursue actions.

In 2019, the CPRMP collected 262 organic samples. These samples represented 59 different commodities from nine different countries. Sixty-nine percent of the organics tested (180), were of domestic origins; 31% of the samples (82) were imported. Of the 262 organic samples collected, 37 different pesticides were found on 38 samples (Table 4). Three samples, mustard greens and spinach grown in California, and tomato imported from Mexico, had illegal residues of a pesticide that did not have an established tolerance. More detailed information about the State Organic Program.

When illegal pesticide residues are detected, DPR quarantines the produce containing the illegal residues. The owner of the quarantined produce has the option to either securely dispose of it on site, or with prior DPR approval "recondition" the produce or convert it into byproducts. Reconditioning can include, washing, peeling or simply waiting for the pesticide residue to breakdown to acceptable tolerance levels or be eliminated entirely if the illegal residue(s) has no established tolerance. After reconditioning, the owner must pay for the sample to be reanalyzed. If test results show the pesticide residue below the legal tolerance, DPR may allow sale of the produce. If not, disposal of the produce is required.

DPR investigators trace the movement of the produce with illegal residues by contacting distributors, retailers, and wholesalers throughout California. DPR quarantines and collects additional samples if suspected of carrying illegal residues. If it is determined that the produce with illegal pesticide residues was grown in California, the County Agricultural Commissioner (CAC) in the county where the produce was grown will investigate to determine the source of contamination. Frequently, DPR scientists assist CAC staff with this investigation. CACs have authority to levy civil penalties for illegal use of pesticides.

Also, in 2019, DPR imposed $175,435 in civil penalties against one produce company with a history of importing and selling produce with illegal pesticide residues.

Information on these penalties can be found at Produce with Illegal Pesticide Residue Fines and Settlements.

All 2019 CPRMP produce sampling results are available for downloading on DPR’s website. Click on "A-Z Index" and then go to "Residue Monitoring Program".