California has the nation's most comprehensive program to regulate pesticide use. Under the California Department of Pesticide Regulation (DPR) Program: In 2014, DPR collected 3,471 samples of more than 150 different fruits and vegetables from businesses in the channels of trade, including wholesale and retail outlets, distribution centers, and farmers markets. DPR's regulatory authority does not cover sampling and testing of processed produce. The California Health and Safety Code assigned that responsibility to the California Department of Public Health. Accordingly, DPR only sampled and tested raw agricultural commodities derived from plants.

All samples were analyzed in California Department of Food and Agriculture (CDFA) analytical laboratories, located in Sacramento and Anaheim, using multi-residue screens that can detect more than 300 pesticides and pesticide breakdown products.

"When residue testing detects prohibited substances at levels that are greater than 5 percent of the Environmental Protection Agency's tolerance for the specific residue detected or unavoidable residual environmental contamination, the agricultural product must not be sold, labeled, or represented as organically produced".

There are some pesticides that are approved for use in organic farming. Residues of those pesticides must be less than or equal to the U.S. EPA established tolerance for the pesticide on the commodity tested.

The DPR Pesticide Residue Monitoring Program does not set an annual goal for the number of organic samples to collect. In 2014, DPR collected 234 produce samples labelled organic. The CDFA laboratory, which analyzed those samples, reported results for the DPR organic samples to both DPR and the CDFA Organic Program. These results are summarized in the following graph:

In 2014, there were low percentages of illegal pesticide residues in samples of certain fruit and vegetable commodities produced in certain countries.

The twelve commodity/ country-of-origin combinations (minimum of 30 samples) with the lowest percentages of illegal residues in 2014 were:

Most of the 2014 illegal pesticide residues were at very low levels (a fraction of a part per million [ppm]).

Significance of the Results

While the overall goal of DPR's regulatory program is to ensure that all fresh produce is in compliance with pesticide safety standards, a produce item with an illegal residue level does not necessarily indicate a potential health concern. DPR Environmental Scientists and Toxicologists evaluate each illegal pesticide residue to determine if there are potential health concerns. The results from years of DPR residue monitoring document the overall safety of produce grown and consumed in California. 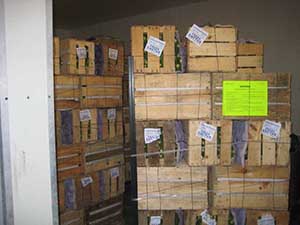 When illegal pesticide residues are found (those above the U.S. EPA tolerance level or those in which no tolerance is established for the pesticide detected on the commodity analyzed), DPR immediately investigates and removes the produce containing the illegal residues from sale and the channels of trade. 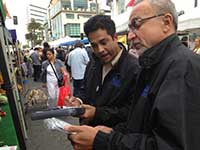 In addition, DPR traces the movement of the produce containing illegal residues by contacting distributors, retailers, and wholesalers throughout California, obtaining copies of invoices, customs forms and other paperwork, imposing quarantines and conducting additional sampling as needed.

If during trace-back it is determined that the produce containing an illegal pesticide residue was grown in California, the County Agricultural Commissioner (CAC) in the county where the produce was grown, will investigate to determine the source of contamination. Frequently, DPR scientists assist CAC staff with their investigation. DPR and CACs have authority to levy civil penalties for illegal use of pesticides.

In December of 2014, DPR imposed a $21,000 civil penalty against a California produce importer with a history of recurring illegal pesticide residue violations, mostly on produce imported from Mexico. All recent DPR fines and settlements for produce with illegal pesticide residue can be found with the following link: "Produce with Illegal Pesticide Residue Fines and Settlements". 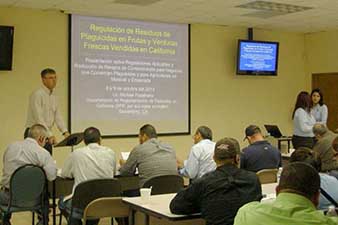 In October of 2014, DPR took a proactive step in trying to eliminate illegal pesticide residues in produce imported from Mexico. A DPR staff scientist travelled to Mexicali and Ensenada in the Mexican state of Baja California and gave presentations to growers about the DPR Pesticide Residue Monitoring Program. Besides providing a description of the program, including its scope, its goals, and the methods used for the analysis of samples, the presentations included the following topics:

DPR is also actively working with the U.S. Food and Drug Administration (FDA) and CACs to identify and eliminate potential sources of illegal residues. DPR also collaborates with trade organizations and grower groups, encouraging them to educate their constituents about preventing pesticide residues in their commodities.

In April 2014, DPR fully implemented the new GC/MS technology in the Anaheim laboratory. Therefore, the CDFA laboratories in Sacramento and Anaheim are now using LC/MS and GC/MS for the analysis of all Pesticide Residue Monitoring Program samples. Both laboratories now screen all samples for more than 300 pesticide compounds and pesticide breakdown products.