SACRAMENTO – Tests on produce collected by the California Department of Pesticide Regulation (DPR) indicate that the vast majority of fruits and vegetables available for sale in California meet stringent pesticide safety standards. During its 2016 survey, DPR found 96 percent of tested California-grown produce had little or no pesticide residues.

“Once again this report shows that California consumers can have high confidence in the fresh fruits and vegetables available to them at stores.” said Brian Leahy, Director of DPR. “A strong regulatory program gives guidance to the proficient farmers and pesticide applicators that grow the fruits and vegetables that are part of a healthy diet.”

The report is based on year-round collection of 3,585 samples of produce, from 27 different countries, including those labeled as “organic”. California grown produce accounted for 24 percent of the samples tested. DPR scientists and staff sampled produce from various grocery stores, farmers’ markets, food distribution centers, and other outlets throughout California.

The U.S. Environmental Protection Agency (U.S. EPA) sets levels for the maximum amounts of pesticide residue that can be present on fruits and vegetables, called a "tolerance". It is a violation if any residue exceeds the tolerance for the specific fruit or vegetable, or if a pesticide is detected for which no tolerance has been established. However, a sample with an illegal pesticide residue does not necessarily indicate a potential health concern

The produce is tested for nearly 400 types of pesticides using state of the art equipment operated by the California Department of Food and Agriculture.

Highlights from the 2016 report include: 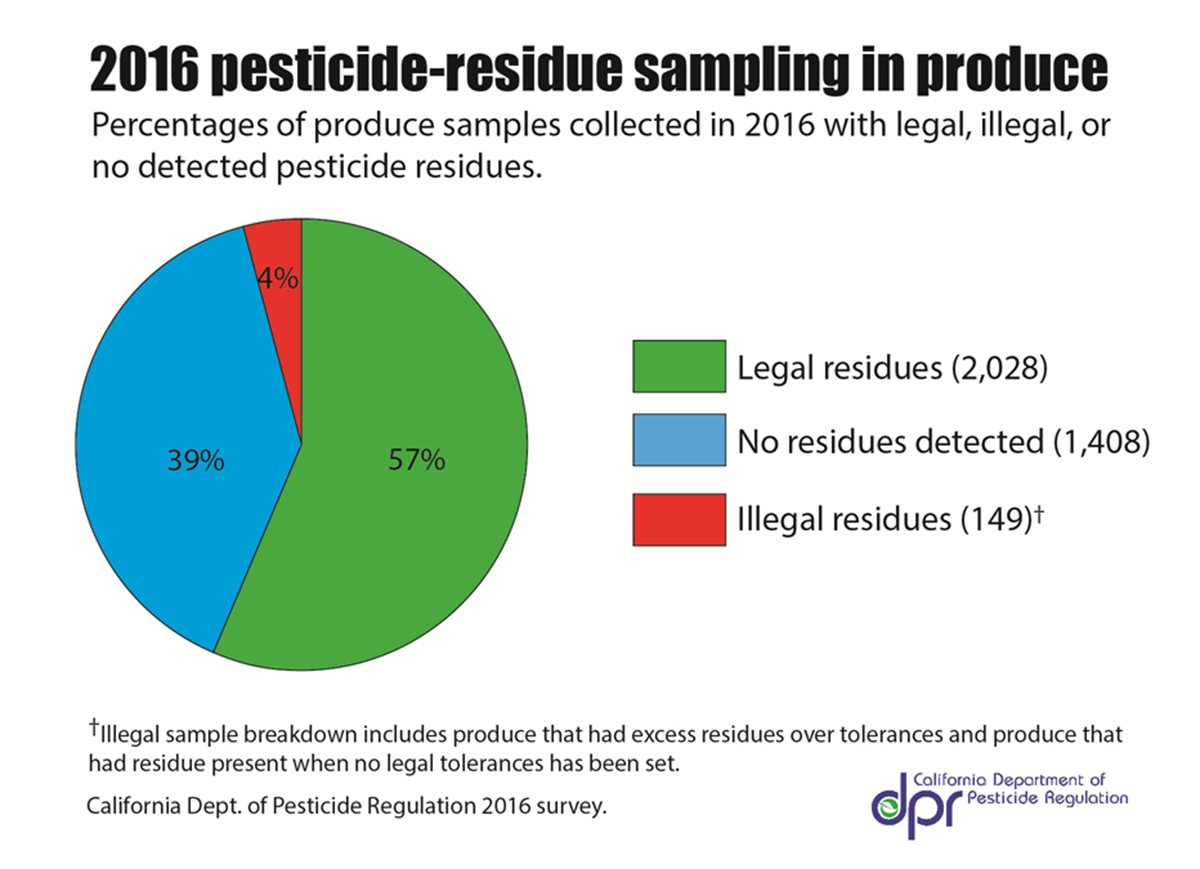 Produce that most frequently tested positive for illegal pesticide residues in 2016 include Snow Peas from Guatemala, Longan from Vietnam, Ginger and Lichti nuts fruit from China; Cactus pads from Mexico; and Bok Choy from the United States.

If illegal residues are found DPR immediately removes the illegal produce to prevent it from reaching consumers and the department also attempts to trace it to its source. DPR then verifies that the produce is either destroyed or returned to its source.

Businesses that violate California pesticide residue laws face loss of their product and fines. For example, in September 2016, DPR imposed a $10,000 fine against a California grower after an illegal pesticide was detected on his grapes in the marketplace and on the crop in his 43-acre vineyard.