(Sacramento) – Tests on produce collected by the Department of Pesticide Regulation indicate the vast majority of fruits and vegetables available for sale in California meet stringent federal pesticide safety standards. During its 2014 survey, DPR found 96.4 percent of tested California-grown produce had little or no pesticide residues.

"This report further confirms that California's vigorous pesticide regulatory program creates a reliable marketplace where consumers can have faith in their fresh fruits and vegetables," said Brian Leahy, DPR director. "The pesticide rules and oversight we have in this state are effective at protecting the produce that we enjoy eating."

The report is based on year-round collection of about 3,500 different samples of produce, including those labelled as 'organic', conducted by DPR scientists at grocery stores, farmers markets, food distribution centers, and other outlets throughout California.

The produce is tested using state of the art equipment for 300 types of pesticides operated by the California Department of Food and Agriculture (CDFA). The U.S. Environmental Protection Agency sets standards allowing each piece of fruit and/or vegetable to contain trace amounts of pesticide. The highest residue level that is allowed on that commodity is called a "tolerance". It is a violation if a residue exceeds the tolerance for the specific fruit/vegetable, or if no tolerance has been established.

Highlights from the 2014 Pesticide Residues in Fresh Produce include: 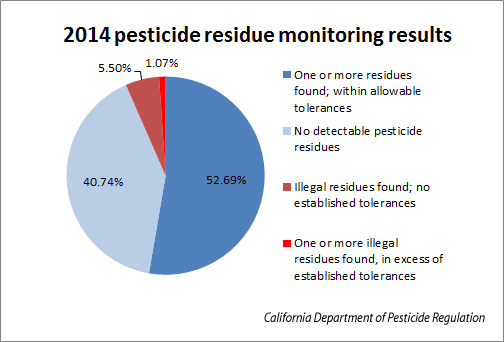 If DPR finds produce with illegal residues, it quickly works to remove it from the chain of distribution (to prevent it from reaching consumers) and also attempts to trace it to its source. The tainted lots are quarantined.

Businesses that violate California pesticide residue laws face loss of their product and also fines. In December 2014, DPR imposed a $21,000 fine against a California produce importer with a history of recurring pesticide residue violations, mostly on produce imported from Mexico. See press release on Repeat Pesticide Offenders. Click here for a video story of inspectors collecting samples and testing for pesticides.

DPR continues to find a small but significant number of cases of illegal residues on fresh produce from Mexico and other countries. To help address this, in 2014 DPR enforcement staff gave presentations about the DPR Pesticide Residue Monitoring Program to about 160 Mexican fruit and vegetable growers at workshops in Mexicali and Ensenada.

The 2014 pesticide residue monitoring data is posted at: www.cdpr.ca.gov/docs/enforce/residue/rsmonmnu.htm.