SACRAMENTO, CA – The California Department of Pesticide Regulation (DPR) announced that once again, the majority of produce it tested annually had little or no detectable pesticide residues and posed no health risk to the public. 98 percent of all California-grown produce, sampled by DPR in 2013, was in compliance with the allowable limits.

“This is a vivid example that California fresh produce is among the safest in the world, when it comes to pesticide exposure,” said DPR Director Brian R. Leahy. “DPR’s scientifically robust monitoring program is an indication that a strong pesticide regulatory program and dedicated growers can deliver produce that consumers can have confidence in.”

Click here for a video story of inspectors collecting samples and testing for pesticides. 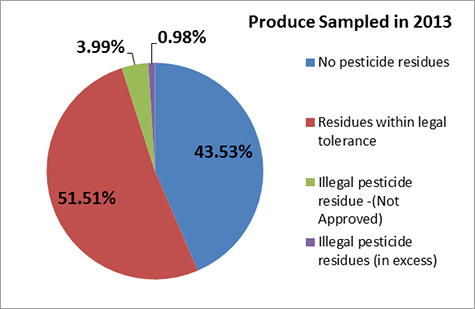 Each piece of fruit or vegetable may legally contain trace amounts of one or more pesticides. The amount and type of pesticide (known as a tolerance), is limited by the U.S. Environmental Protection Agency. DPR’s Residue Monitoring Program staff carries out random inspections to verify that these limits are not exceeded.

The produce is tested in laboratories using state-of-the-art equipment operated by California Department of Food and Agriculture (CDFA). In 2013, these scientists frequently detected illegal pesticide residues on produce including:

Most of the 2013 illegal pesticide residues were found in produce imported from other countries and contained very low levels (a fraction of a part per million). The majority of the time they did not pose a health risk.

One exception occurred in 2013 when DPR discovered Cactus pads, imported from Mexico, that were tainted with an organophosphate-based pesticide. This had the potential to sicken people. DPR worked with the CA. Dept. of Public Health to issue an alert to consumers in February 2014. DPR also worked diligently to remove the entire product it from store shelves and distribution centers. In addition, DPR asked the US Food and Drug Administration to inspect produce at the borders and points of entry to stop shipments into California.