(SACRAMENTO) – The California Department of Pesticide Regulation (DPR), in cooperation with the California Air Resources Board (CARB), is increasing the number of communities where air monitoring for pesticides will be conducted.

The expanded air-monitoring network will allow DPR to obtain more data from more locations and give a more comprehensive picture of pesticide concentrations in the air in various California agricultural communities.

The expanded network will be in effect starting this month and conclude by December 2018. The major changes include:

California is the only state that monitors air as part of its continuous reevaluation of pesticides to ensure the protection of workers, public health, and the environment.

Samples will be collected one day per week at each location. The sites, which include six schools, were chosen based on several factors including pesticide use on surrounding farmland; demographics including the percentage of children and elderly living nearby; and the income of the local population.

DPR formed the Air Monitoring Network in 2011, the first of its kind in the nation. The pesticides were chosen for monitoring based on the amount of use and their potential health risks. They include all the major fumigants and many organophosphates. 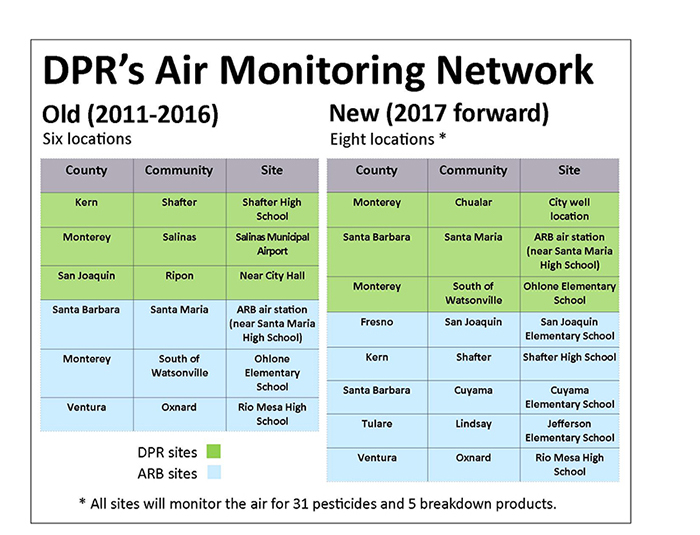 Please note that DPR scientists also conduct seasonal and other short-term air monitoring for pesticides as part of DPR's commitment to continuously evaluate the use of registered pesticides in California.