(SACRAMENTO) – The California Department of Pesticide Regulation (DPR)has fined a Bay Area hydroponic gardening store $20,000 for violating state pesticide laws that are designed to protect public health. The action is the latest in a series of enforcement cases involving hydroponics stores, whose customers often include cannabis growers.

The action against The Grow Biz, 1697 Pomona Ave., San Jose, California 95110, is for selling illegally repackaged pesticides. Under California law, it is illegal to sell a pesticide unless it is in its original manufacturer's container or packaging approved and registered by DPR.

"To repackage a pesticide so that it is unlabeled is an irresponsible act that potentially endangers employees, customers and their families and pets" said Brian Leahy, DPR director. "It can also adversely affect our environment including our water and soil." 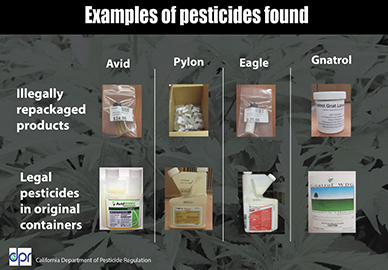 In March 2017, DPR enforcement staff made an unannounced inspection visit to The Growbiz in San Jose. Staff discovered packets of five illegally repackaged agricultural pesticides offered for sale to consumers. These illegal packets were made from the legally registered containers of pesticides that could only be sold for commercial agricultural use and were not permissible for home use.

Some of the pesticides required workers to wear protective clothing, including waterproof gloves, and were harmful if absorbed through the skin. Their illegal containers did not have mandatory safety warnings, such as "Keep out of reach of children" or "Avoid contact with skin, eyes clothing." They also did not contain the required information about what to do in emergencies or any first aid treatment. They also lacked information on how to safely store and dispose of the pesticides.

During the course of the inspection and subsequent investigation, DPR also discovered that Growbiz was in violation of California state law that requires any company that sells an agricultural pesticide to have a DPR-issued pest control dealer license.

The action against Growbiz is the latest in a string of similar cases involving hydroponic stores.

Due to federal laws, no pesticides are currently registered by the U.S. Environmental Protection Agency specifically for use on cannabis. Information about legal ways to control pests in California can be found on Cannabis and Pesticides.

More resources can be found at California Cannabis Portal.