Capitol Park in Sacramento is one of the capital region's greenest places.

Its 40 acres are blanketed in lush lawns and adorned with an abundance of shrubs and flowers, including renowned rose and camellia gardens, and more than 1,000 (about 200 varieties) of trees. Yet visitors may be surprised to know that this botanical delight is cared for by staff who hardly use any synthetic chemical pesticides.

It's maintained by a staff of 10 groundskeeepers who work for the state Department of General Services grounds keeping division. The staff also maintains a handful of state government properties in the Sacramento region, in addition to the park.

The groundskeepers are experts and increasingly enthusiastic about their work, which is embracing a more-water-conscious, less-pesticide-reliant philosophy.

They are, indeed, becoming greener gardeners.

The drought of 2012-2017 changed policymakers' and the DGS's perspective on water usage. So the department began a major water-saving redesign of the grounds. It included removing 76,000 square-feet of lawn and replacing it with bark mulch, decorative rock and drought-tolerant grass, and changing irrigation practices to reduce runoff, among other things. 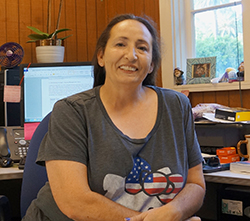 Longer-term changes have involved the use of integrated pest management. IPM is a strategy for controlling insects, fungi and weeds which emphasizes use of least-toxic alternatives. Examples range from growing sturdier plants, to setting physical traps, to introducing "good" bugs into a landscaped.

"We've always had a certain IPM, but we've embraced a more-natural IPM in the past eight years or so," explained Lisa Paisley, a DGS supervising groundskeeper who has worked for the department for seven years.

Paisley says she and other groundkeepers regularly attend seminars and training on IPM practices. Four have completed a 10-week EcoLandscape California "Green Gardener" training, about eight have Qualified Applicator Certificates, many attend seminars put on by the Pesticide Applicators Professional Association, and most have attended the Soil Foodweb, Inc. seminars put on by Dr. Elaine Ingham, a microbiologist and soil biology researcher with an organic gardening bent.

Capitol Park itself is an evolving classroom.

The groundkeepers routinely experiment and share ideas about how to control park pests with a minimum of force.

Example: A scale outbreak in June. Instead of reaching for a pesticide first, the staff used blasts of water in an attempt to knock them off the citrus trees. When that failed to produce the desired result, they turned to a soap-and-water mixture (insecticidal soap), which did the trick. From start to finish, monitoring and evaluating the problem and the efficacy of the attempted control was critical.

"It's taking the least toxic methodology," explained Paisley. "There is a certain amount of tolerance -- you don't have to eliminate every single pest." 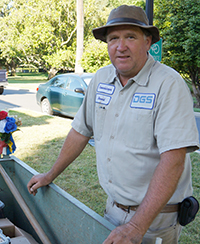 Tools of the Trade

"When we first started we were like, 'what are we going to do?'" explained Dave Burnop, a horticulturist and a longtime member of the DGS grounds keeping staff.

The staff has used a variety of IPM tools successfully. These include compost tea fertilizer (healthier plants better resist pests), nematodes (microscopic worms) introduced into the soil to control lawn grubs, other types of beneficial insects like lady beetles, a flame-thrower-type device that cooks weeds, a bevy of folk remedies, and more precise irrigation schedules, since drought-stressed plants are prone to pest damage, while overwatered ones can acquire diseases like mildew. 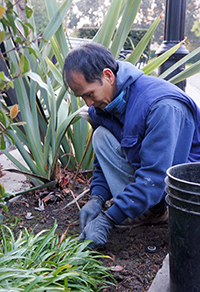 With the most intractable pest cases, the staff turns to more-conventional pesticides.

Burnop has taken a particular interest in beneficial insects. The rose garden is abuzz with populations of lady beetles, praying mantises, lace wings and the like. He says he doesn't use any pesticides in the garden except for occasionally fungicides (roses are vulnerable to mildew).

Each year, he collects mantis egg sacks in the garden and tends to them in the grounds keeping building – a tranquil brick-and-wood structure that, fittingly, was built in 1913 as an "insectary" for breeding beneficial insects.

Burnop and Paisley say the increased emphasis on IPM engages the staff, and increases communication among them.

"Work is getting more fun again."