Remember: Misuse of cleaners and sanitizers may cause injury, illness, and even death

SACRAMENTO - Would you use a sledgehammer to kill a fly? When it comes to cleaning a house, business or school, many people are doing something like that – overdoing it with cleaners, sanitizers and disinfectants, and inadvertently harming themselves or others in the process.

This has been particularly evident since the outbreak of novel coronavirus in the United States. Since early March, the U.S. Centers for Disease Control and Prevention reports that poison control centers have seen a surge in injuries, particularly among children under the age of 5.

(Important side note: Some people have injured themselves intentionally ingesting cleaners or disinfectants trying to ward off illnesses. Don’t do it!) 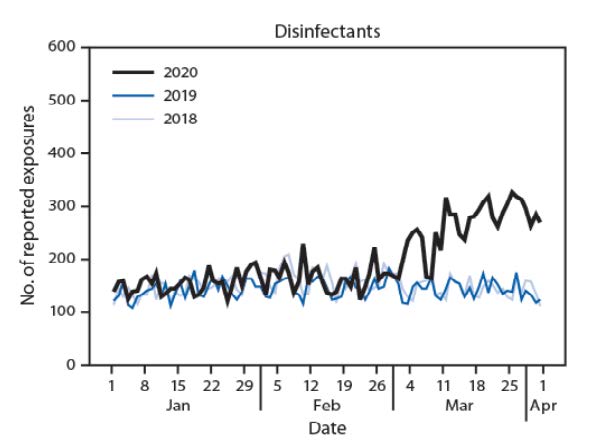 "Especially right now ... people think more is better, but it's not," explained Michel Oriel, a research scientist and supervisor in DPR’s Pesticide Illness Surveillance Program (PISP). Before taking out the bottle and sponge, she said, you should decide what you are trying to accomplish. Are you intending to kill germs or just remove dirt or grime?

"A lot of people don’t make the distinction between cleaning and disinfecting when they buy a disinfectant,” explained Lucy Graham, also a PISP research scientist.

You may not know it, but there are actually differences between cleaners, sanitizers and disinfectants in terms of purpose and, especially, risk of injury when not used according to the label instructions.

“You want to use the right tool,” Oriel said. “You don’t want to use a sledgehammer when a fly swatter is sufficient.”

Why be so cautious? In short, because sanitizers and disinfectants are a leading cause of pesticide-related injuries and illnesses in California.

Nearly half of all reported non-agricultural pesticide injuries involve disinfectants and sanitizers, which are considered pesticides under federal and state law. These pesticide-related injuries occur both at the workplace and at home. 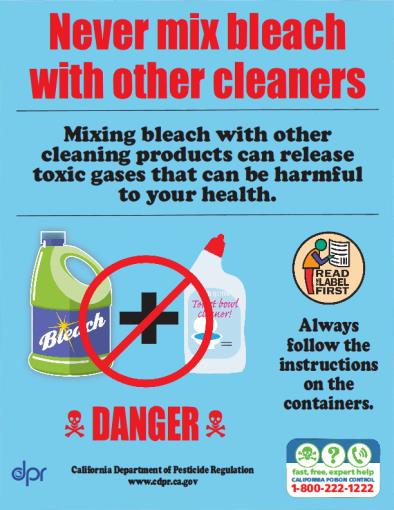 A common mistake is using too much of a product or mixing incompatible products, like bleach with cleaners containing ammonia or acids. The results can be harmful or even deadly.

"We receive a large number of illness reports of people mixing bleach and toilet bowl cleaner, bleach and ammonia, or bleach and all-purpose cleaners," Graham said. Mixing these chemicals releases dangerous gases that can burn your lungs and may lead to horrifying consequences, she explained.

She was cleaning her bathroom with the door closed, and added bleach into a toilet that already contained toilet bowl cleaner. Just 10 minutes later, she opened the door and her family caught a big whiff of the resulting vapors.

She began to have difficulty breathing, so her dad took her to the emergency room at a local hospital where she was treated with oxygen and inhalers. She ended up being hospitalized for five days after X-rays showed she had a perforated lung and some internal bleeding.

Mixing bleach with other products can actually be deadly. One widely reported case occurred in November at a restaurant in Massachusetts. An employee mopping the floor accidentally combined two products, bleach and an acidic descaler, releasing toxic vapors. The restaurant’s 32-year-old manager was overwhelmed by the vapors as he attempted to clean up the mess. He later died at a hospital. In addition, more than a dozen employees and patrons were sickened and sought medical care – complaining of stinging eyes and nausea.

More common than inhalation of noxious chemical reactions are accidental ingestions. This is usually the result of people improperly storing sanitizers and disinfectants in unlabeled food or beverage containers, or by leaving them within reach of children.

"People often buy large bottles of sanitizers and disinfectants and transfer them into smaller beverage containers and do not label them," explained Oriel. "Then their child gets ahold of the container and drinks from it.” 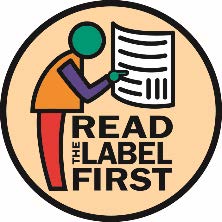 What's particularly tragic is almost all pesticide-related injuries reported to DPR could have been prevented if people followed the product instructions – also called the "label." The product label includes information about the amount to use, dilution rate, personal protective equipment needed, ventilation requirements, and first-aid. Labels also provide warnings about incompatibility with other chemicals, as well as to not store in improperly labeled containers.

"It's important to read the label first. That is where safety begins," said Oriel.

Using Disinfectants, Sanitizers, Medical Sterilants, and Other Antimicrobials in the Workplace (En Español)

What About Hand Sanitizers? (En Español)