Agricultural pesticide runoff grabs headlines, but did you know that urban pesticide use can also pollute California creeks and rivers?

Determining the extent of the pollution has been the focus of recent studies by scientists at the California Department of Pesticide Regulation (DPR). They've found several pesticides at levels toxic to aquatic invertebrates in Northern and Southern California watersheds fed by urban runoff. These organisms play a critical role in the food chain so are important to broader ecosystems.

Two of the most commonly detected pesticides are pyrethroids and fipronil.

Pyrethroids are one of the most common classes of pesticides used in the U.S. Useful in killing bugs, they're found in a wide range of products – from lice shampoo to ant baits. While generally harmless to humans, they can be toxic to non-targeted crustaceans and insects. (Results of a recent study, PDF)

Fipronil is used against a range of pests, from ants to termites and wasps. It, too, can be toxic to unintended organisms. Studies by DPR scientists show fipronil was detected in nearly half of all surface water samples collected between 2008 and 2014. The water samples were collected at storm drains, creeks and rivers. The study found that fipronil concentrations were above USEPA's aquatic life benchmark for invertebrates 48 percent of the time. The benchmark is a level of protection above which a pesticide could be toxic to certain groups of aquatic organisms.

Fipronil was most common in Southern California waters and the level in waterways tended to increase with storm water runoff, according to the study Monitoring Fipronil and Degradates in California Surface Waters, 2008–2013. 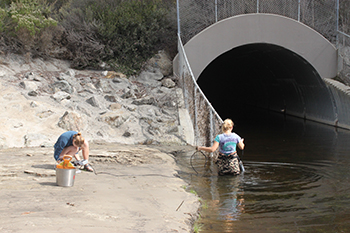 So where do the chemicals turning up in suburban watersheds come from? Both types of pesticide are widely available for homeowners, do-it-yourselfers, and licensed applicators.

The scientists' work has not only included measuring pesticide residues in waterways, but also examinations of the kinds of products being sold in certain regions, door-to-door surveys of homeowners about pesticide use on their properties, and outreach to professional applicators.

DPR's goal is to better understand how much pesticide runoff comes from homeowners and how much is from professional applications.

Door-to-door surveys in Southern and Northern California helped determine answers to the question of source.

In 2015, DPR scientists went door-to-door in neighborhoods in Laguna Nigel and Folsom asking residents about their pest control practices. Forty-three percent of the 89 people questioned said they used a professional applicator to treat their homes in Southern California, where the most common pests are ants and spiders. Another 31 percent applied pesticides themselves, while 21 percent said they used none.

In Northern California, 36 percent of the 101 people surveyed used a professional applicator while 35 percent said they self-treated their properties (Survey of Pesticide Use by Homeowners in Two California Residential Neighborhoods, PDF). The results were considered valid because they mirrored surveys done in 2003, according to DPR scientists.

Recent studies focus on collecting water samples from a few neighborhoods in Sacramento, Placer and Orange counties, where high levels of pyrethroid pesticides and fipronil have turned up.

Going forward, DPR is working with pesticide registrants on ways to reduce runoff into waterways.

DPR has worked with the City of Roseville, which is beginning public-information campaigns urging people to use Integrated Pest Management in their pest control applications. DPR and Roseville's collaboration includes sharing of watershed information for Pleasant Grove Creek, where high levels of pyrethroids have been detected.